No, not a new hobbit from a Peter Jackson movie! I was looking at some ACW terrain on BT Sherman's 10mm blog - Very impressive and quite accurate.  He uses blankets for an underlay, but given 10mm figures are not heavy, I should be able to get a good effect using upholstery foam. At 1/2" thick and 25.5" wide, it is a few cents under $9 a foot from a store within a 20 minute drive. I will have to get a couple of yards to experiment with - 4 yards will cover my table once.  I hope it will prove adequately shape-able.

The trick is finding exactly the right fabric to go over it.  While I would be surprised if it will all fit into a normal backpack, I should be able to assemble something that can be carried easily on transit.
Posted by Lentulus at 8:26 PM No comments: Links to this post

A use for corps command stands

When you look at accounts of the battle, the individual head-space of the corps commanders -- more the French than the German, but the German to some extent -- of the Corps commanders.  This could be represented by making resolve a corps rather than a division attribute.  It also could cut down on how much we represent?

Note Volley and Bayonet tracks hits by regiment, but exhaustion by division -- not that different a concept.

Note that, in the interest of keeping markers and labels to a minimum, I plan to denote which corps is which by the color of the tracking die.  For the German, that might mean some added patterns -- probably matching that used on the epaulettes of the infantry of each corps.  Since these dice are not for rolling, any effect paint might have on rolls is unimportant.
Posted by Lentulus at 5:52 PM No comments: Links to this post

Corps command stands - worth it?

Given the difficult nature of communications in the late 19th century, it makes a lot of sense to know where your senior commanders are.  The very top is simple:  for the Germans, the All Highest and his staff plus two army commanders; for the French, there is "our glorious Bazaine" at the very top.

For a muti-player game three players is fine for the Germans but one commander is lean for the French.  For that matter, the German armies were not equally represented.

The problem is that our next lower level, the Corps, is a small number of stands - 3 for the Germans, 4 or 5 for the French.  There are also quite a number of Corps (16 or so counting both sides), so in a multiplayer game a team member is not going to play just one.

On the other hand, these people are interesting, and their personalities and rivalries influenced the battle.  Is that a detail that deserves capture, or just something the player should bring to the game himself?
Posted by Lentulus at 1:26 PM No comments: Links to this post

The Too Fat Lardies are doing the wargames community a great services by publishing modern editions of the 1824 and 1862 Kriegspiel rules.  I have charted data from the 1862 edition infantry fire table to consider the professional expectations of the time concerning breachloader performance.

First, performance as a function of range 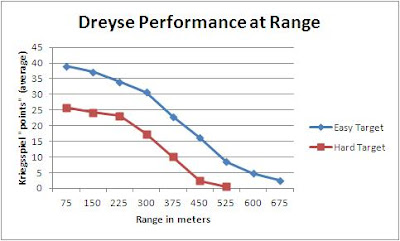 The vertical axis is the mean of six results corresponding to a 1d6 roll.  Points in the context are a figure of merit that inputs into a second computation concerning target density.  More or less, multiply by 4 to see how many enemies an infantry company can kill in a two minute turn.  On the range axis, the original chart is in hundreds of Prussian paces of  0.75m

An easy target is a body of troops advancing in the open; a hard target are men in cover or obscured.   The key point here is the knee of the curve between 250 and 300m -- an inch more or less on our table. 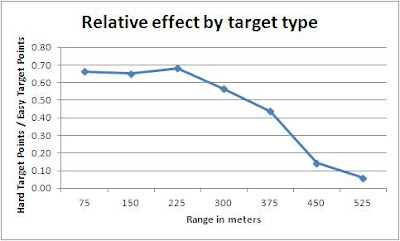 This is the ratio of the values charted above.  The point to note here is that out to 250m or so, they expect fire against a hard target to be 2/3rds as effective as fire against a target in the open; but long range fire is disproportionately less effective against hard than against easy targets.

Now, while the first chart is going to be very different for a chassepot vs a dreyse, I have to ask myself how the second chart will change.
Posted by Lentulus at 11:39 PM No comments: Links to this post

Just a minor point:  if my choice settles out to one between having an enjoyable game and fitting into a two hour window, the duration criteria will be what suffers.
Posted by Lentulus at 11:13 AM No comments: Links to this post

As I mentioned a while ago, we want to pack 12 hours of battle into 3 hours of play (and less would be better).  Actually, that's optimistic; on August 16 a day at Metz is just 10 minutes short of 14 hours.  I can't really suggest a process to sort out how much time it would take one side to move or otherwise act with the units under its command.  All I can think of to start is to grab a number out of a hat, try it, and refine from there.

So, we will start with turns representing three hours of action and work from there.  That would give a five turn game, which would certainly require players to get quickly to the point.  Anyway, I will look at Mars-la-tour and Gravelotte in three hour episodes and see how a game would flow on that basis.

As for the research part

I've been looking at the Volley and Bayonet rules.  Although they are a stand=regiment set and so two command levels lower, they are clean grand-tactical rules.  There are two mechanisms I paticularly like:

Finally, a nice collection of art and music to remind us of what we are trying to represent.


Posted by Lentulus at 10:16 PM No comments: Links to this post

A bit more meat on the divisional bones

As you have noticed, I have been messing steadily with basing.  Here's the latest comparison: 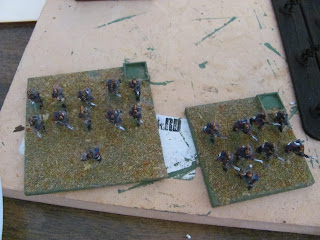 On your left, 50mm square; on your right, 40mm square.  I'm going with the 50mm since I can organize more interesting min-dioramas with supports and firing line or the like.

I'll set up brigades and artillery on a 25mm front - 20mm is too cramped, but a 60mm front is getting too big.

I had been using 40mm since I have plenty from previous projects, but since this will be a less common base for me I'll order the new one from Minibits in 2mm mdf.
Posted by Lentulus at 3:18 PM No comments: Links to this post